Empowering people who are blind or visually impaired to live with increased independence, confidence, mobility & dignity by providing them with expertly matched guide dog partners. Our Guide Dogs and training programs are provided free of charge. 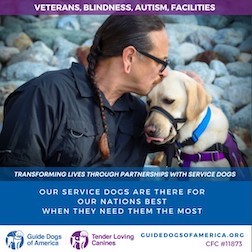 In 2004 a Guide Dogs of America instructor offered to take Tom Olzak for a guide dog test drive. Tom excitedly picked up the harness handle and before he knew it, was flying down the street with a dog appropriately named "Flight." Going blind had caused Tom's pace to dramatically slow. His walk with Flight was the first time in years he "felt the wind" on his face. After the walk he jokingly turned to one of his buddies and said, "Call my wife and tell her I'll see her in 21 days. I'm going to GDA."

Shortly thereafter Tom was accepted to GDA. During his second week with his new guide Wrigley they went for their first "night walk." Tom had not traveled at night alone since losing his vision. He was terrified. Before he took his first steps Tom kneeled down and said to Wrigley, "How are we going to do this?" Wrigley's look assured him, "We got this, nothing will happen to you on my watch. I promise." They never turned back. Thousands of miles later the day came to retire Wrigley. Tom went in for one last embrace with his best friend. Wrigley looked at him and seemed to say, "I kept my promise."

Now on his second guide dog Goliath, "G" as he calls him, Tom and his guides have traveled more than 5,000 miles in the air, ridden the train/tram, and sailed on boats. "T&G" volunteer at a college in the low vision department where they help people in the early stages of vision loss. Tom also holds a seat on our board of directors.

When asked why we are his school of choice, Tom said, "I come from a military family and I often reference the Marines. 'Once a Marine, always a Marine.' Well, when you come to Guide Dogs of America, once you are GDA family, you are always GDA family."