in combat, our Military warriors count on their comrades. At home, they can count on us! PHF uses your generous donations to provide critical assistance grants, scholarships, service dogs & PTSD programs that enhance the lives of veterans & their families. 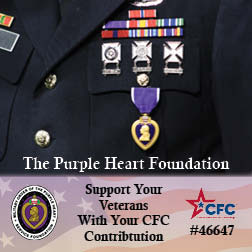 Greg realized how difficult returning to civilian life was. But after months of surgeries and rehab, Greg started focusing on what he could do instead of what he couldn’t. He began night classes and was later accepted to Harvard Medical School. Although the VA paid Greg’s tuition, he would face many out of pocket expenses by starting a new life in Cambridge.

$4,500 was raised and awarded as a scholarship to Greg as a small token of our gratitude to help pay for room and board, book fees, and more. He says “this will go a long way in helping [him] further [his] dream”. Your kindness does more than help one man rebuild a life though. Nationwide, veterans come to us for help after risking everything for our freedom. You can visit purpleheartfoundation.org to see the services you're empowering and you can honor their service and sacrifice by donating today. CFC#: 46647

Donate to impact the life of a veteran today!
Follow Us