We provide free legal services to help military veterans/families secure the disability benefits to which they are entitled from the Dept. of Veterans Affairs and the U.S. Armed Forces. And recruit/train/mentor volunteer lawyers to handle disability cases. 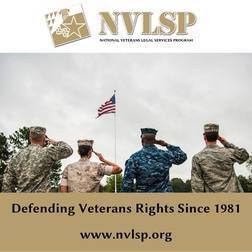 An Army Infantryman who deployed to Iraq in 2004, 2006 and 2008, experienced numerous combat traumas. On the Sergeant’s second deployment, his vehicle was hit by an IED. His spine was fractured and two of his crewmembers were killed. He was awarded the Purple Heart and Combat Infantryman Badge. He began experiencing symptoms of PTSD but continued to serve. In October 2010, he was diagnosed by the VA with PTSD. He was provided disability processing for his back, with no acknowledgment of his PTSD diagnosis and its impact on his service. In January 2011, he was provided a disability severance payment for his back condition. A pro bono attorney volunteer with NVLSP’s Lawyers Serving Warriors® program assisted the veteran in applying to the Army Board for Correction of Military Records requesting that his PTSD be found unfitting. The Board remanded the case for new Disability Evaluation System processing. On remand, the Army concluded that the veteran’s PTSD was unfitting at discharge and merited a permanent 50 percent rating. The Army found that his PTSD was a combat-related disability. The pro bono partner firm is now assisting the veteran with an application for Combat-Related Special Compensation.