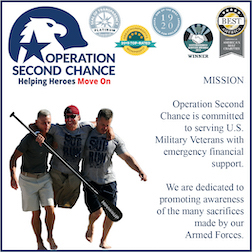 Adam Kisielewski was just 17 when he joined the Marines. After 3 years in service, he received orders to serve with 2nd BN 2nd Marines out of Camp Lejeune, NC. After completing a "work up" he deployed to Iraq as a squad leader and operated in areas just outside of Fallujah, Iraq. On August 21, 2005, Adam and his platoon leader, Lt. James Cathey, were patrolling a school when they encountered an IED instantly killing Cathey and leaving Adam with an amputated left arm and right leg.

The MedEvac process took 5 days from the time Adam was wounded until he reached Bethesda Naval Hospital. Carrie Kisielewski, Adam's wife, described the situation as chaotic as she recalls the events that occurred nearly 8 years earlier. She says for the first week "we had to keep reminding Adam that he was home and safe." After seven weeks of constant surgeries Adam was deemed stable enough to be moved to Walter Reed Army Medical Center where he would ultimately spend over a year recovering from his wounds.

Operation Second Chance makes it their mission to provide ground level assistance to veterans like Adam. In 2005, OSC was able to help Adam by providing him with transportation so he could buy his family Christmas presents. The gesture meant so much to Adam that today he serves as OSC's Vice President. OSC continues to provide a wide level of services to our veterans offering financial assistance, airfare for family members, and exclusive retreats for veterans and their families. "OSC is the non-profit that fills in where other non-profits and the military can't" says Adam. As long as there are injured veterans returning home OSC will be there helping veterans when they need it most.

Requests for emergency assitance have never been higher (Covid-19). We are providing emergency financial relief every day; keeping the lights on, preventing forclosures and providing scholarships. By increasing our visibility to the public, we might increase the donations received. This means more Veterans helped.