Restoring sight is one of the most effective ways to relieve suffering & reduce poverty. We deliver vital eye care to the world's most vulnerable including women, children and indigenous peoples. Restoring sight - Transforming lives worldwide! 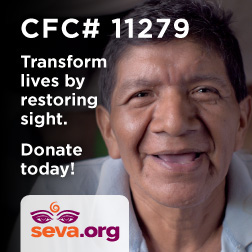 ACT NOW
Your $50 donation will transform a life forever!

Restoring sight is one of the most cost effective interventions to reduce poverty. With clear vision, those you help can return to work and school and live more fulfilled lives.

Seva's vision is a world free of avoidable blindness. Help us reach this goal.

Visit seva.org to see how you can give the gift of sight!
Follow Us