WWESF gives financial aid to disabled vets and their families. Pays medical expenses for rehab excluded by the USG, covers therapeutic treatment for special needs children of active duty military, and sets up IRS 529 plans for dependents of aircrews KIA. 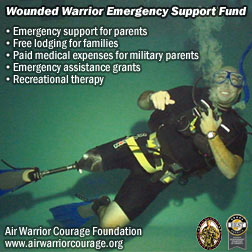