We grow and impact the sport of hockey by helping young people become leaders, even Olympic heroes. We promote a lifelong love of the sport and provide opportunities for our U.S. National Teams, youth, adult, disabled and underprivileged players. 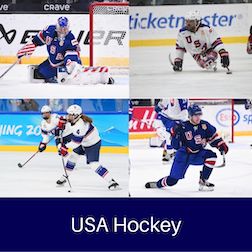 Virlen received a second chance at life the day she was introduced to the game of hockey. The inner-city Philadelphia native had poor grades, no idea how to set goals and no aspirations to excel at school. Then she put on her first pair of skates.

Hunter can't play the sports his friends play because he struggles to walk from a disability that affects his hips. When he was 13, his family learned about sled hockey. Once he got on the ice, he found a game he loved because it wasn't just about one person, but about his team. Hunter looks forward to playing sled hockey weekly.

These players are just two examples of people directly impacted by donations to The USA Hockey Foundation and USA Hockey. Not only are more players on the ice because of donors' generosity, but the game is becoming safer and America is continuing to get stronger in international competition, as well.