Poached for ivory. Their habitat turned into roads & villages. We encourage the peaceful co-existence between humans & elephants through education, promoting alternative livelihoods and protecting elephant spaces and migration routes. 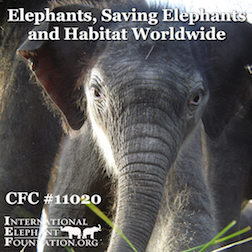 Sometimes it’s worth the effort to teach an “old dog new tricks.” Peacefully coexisting with elephants is a key strategy towards building a sustainable future where elephants are safe, therefore community education and outreach is essential.  Recently in Namibia, a 72-year-old old man attended one of our village meetings about Living with Elephants presented by People and Elephants Amicably Co-Existing Project. This man was well known within the community for chasing elephants in his pick-up truck with children in the back. During the meeting, he repeatedly objected to the concepts being taught. It was clear that he wasn’t fond of elephants, believing horror stories he had heard and feeling strongly adversarial. The meeting included a visit to see wild elephants in the nearby national park to demonstrate what peaceful animals they are if they don’t feel threatened. When an elephant calmly walked past the safari vehicle filled with community members this man literally froze out of fear and this was the moment he was changed.  By the end of the day, he realized he had spent years of spreading misinformation about elephants and behaving badly. To this day he tells that story laughing.  Afterwards he said elephants are wonderful creatures and that they only cause trouble when humans “chase them around” with their cars or make them feel threatened in other ways. He stated that everything he was told about elephants throughout his entire life was a lie and that elephants are peaceful animals.  Successfully turning an elephant adversary into an elephant ally is the power of conservation education, and the kind of buildable change IEF works to develop around the world.