A Kitty's Purrsuit of Happiness 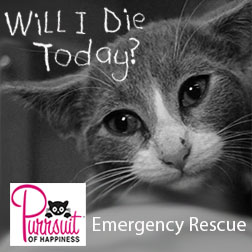 A Kitty’s Purrsuit of Happiness (KPOH) was founded on the belief that all cats deserve to live including the disabled, ill, abandoned, abused, stray and feral. This small but mighty Rescue adds a "w" to the ending of the word "NO" and gets things done! The founder and her husband (an Army Veteran of 21 years & professional pilot) physically rescue from the streets/dangerous situations and network to help all animals.

Some of their more epic rescues include Hurricane Dorian. As airports were shut down KPOH teamed up with fellow Veterans and drove crates immediately from Texas to Florida which were promptly taken over via personal boats for stranded cat and dog survivors to be brought back to the USA. They also were granted permission from the Bahama government to fly to bring supplies as larger disaster organizations with greater resources and outreach were not able to deploy. KPOH also equips Fire Departments with Pet Specific Oxygen Masks, has stepped up to aid hoarding situations, and has raised funds to help spay/neuter homeless cats and dogs in Nicaragua through World Vets. This husband-wife team cares for up to 50 special needs kitties daily in a feline-only, free-roaming indoor sanctuary and have personally helped more than 2400 kitties since 2012. This is a labor of love as a large financial percentage is out of their own pockets and resources.

This year the founder almost lost her life when she pulled over to rescue a golden retriever. As she was approaching the dog a car flew off the road into the ditch. She was barely missed but sadly the dog died in her arms. Being "On The Front Lines" initiated in the military, however, will never end in animal rescue.

ACT NOW
Give abused and homeless cats hope this year!

Did you know that it is estimated to be over 70 million neglected and abandoned kittens and cats trying to survive on their own in the streets of the United States? Most do not live longer than 1.5 years and suffer until they meet an untimely death. You can help change that. Please visit our website at KPOH.org